Home » Theresa Caputo » How Old is the Long Island Medium? What to Know about this TV Show?

We cannot deny the popularity of Long Island Medium has brought a huge recognition for Theresa Caputo. This show is a TLC reality TV series mainly focusing on a medium who claims to communicate with the deceased. The first season premiered on September 25, 2011, takes place in Hicksville, New York. Till the year 2016, the show has released 8 seasons (117 episodes in total). What about this TLC series you want to know?

Follow the topic “how old is the Long Island Medium?” for more info.

The whole series revolves around Theresa Caputo, a normal mom from New York who is trying to navigate the demands of her family members – a retired husband, a 21-year-old son, and a skeptical 17-year-old daughter – while dealing with her extraordinary ability to interact with the dead. Each chapter will show how the gift impacts her life and the lives of people around her. Making use of the gift, she helps taking clients on different emotional, spiritual journeys with the afterlife, especially finding closure with recently departed loved ones.

So, what is Long Island Medium about? As we briefly mentioned above, each episode of this reality show focuses on Theresa the medium, since she will conduct private or group readings with both believers and skeptics. Her hubby, Larry, and two children, Victoria and Larry Jr., have learned to live with Theresa’s claims of mediumship, but it somewhat strains their relationship. In a 2011 interview, the medium claimed that she is able to exchange info with dead people. 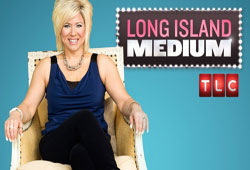 Basically, the series has been a commercial success, running into 8 seasons, and its popularity has led to the star publishing several books and even producing a jewelry line. The followers view it as entertaining and amazing. Overall, the show is described as pretty mild, but it may be disturbing to viewers who are uncomfortable with the topics of psychic ability and death. Caputo’s gift has been deemed fictitious by some critics and observers. They doubt that her abilities and paranormal performances could simply be the result of cold readings, selective editing, etc.

Of course, not all the feedback from the show is entirely negative. While Theresa Caputo’s claim of special powers has been questioned, she’s still described in generally positive terms – the dynamic with her husband and two wisecracking teenagers makes the series like a combination of ‘Real Housewives of New Jersey’ and ‘Bewitched’; particularly when all of the frustrations surface over the medium’s random communications with what she calls ‘spirit’.

If you are curious, readings by Theresa displayed on Long Island Medium TV show are actually chosen from the waiting list, and then, are determined by a set of factors that include availability, location, and the participant’s willingness to appear on the television. Also, during the show ‘Theresa Caputo Live: The Experience!’, she will deliver readings to random audience members.

Find out how much a reading costs with Theresa!

In short, how old is the Long Island Medium? Talking about the show, it has run successfully for 5 years. Though it primarily takes place in New York, it often follows Caputo to other areas when she meets with clients. To delight of the fans, TLC has officially renewed for season 9 yet the release date has not been scheduled.