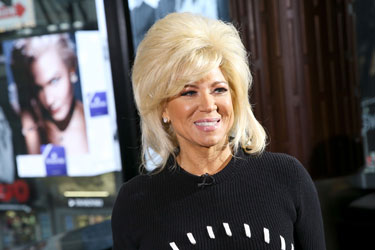 Before she showed up on the show, Theresa is a medium living in Hicksville, New York, who leaves a huge impression with her bubbly personality and big hairdo. According to what mentioned on her website, she is gifted with the ability to communicate with spirits of the departed.

A part of her job is to deliver messages from the spirit world to the living people.

If you’ve watched any episode of her show, then you probably know that she has two children, Larry Jr. and Victoria. Updated in 2018, she finally divorced Larry Caputo, the husband with whom she stayed for 29 years.

After the first episode of Long Island Medium was aired (2011), the medium soon gained the public recognition. Throughout 12 seasons, Theresa has helped many clients get connected with their loved ones passed away, embraced them with important messages and provided them needed closure.

Not only appearing on her own TV series, she also goes on tour and performs a live show in each place she visits – Theresa Caputo Live! The Experience is where she does a live reading for a group of audience.

Everything about Long Island Medium is entertaining, but is it true that Theresa really has the capacity of talking to dead people?

Keep reading to learn more about the series and the medium herself!

What Nationality is Theresa Caputo?

We all know her as Theresa Caputo or the Long Island Medium; however, before she became famous, her real name is Theresa Brigandi and was born on June 10, 1966, in Long Island, Hicksville (New York, USA).

So definitely she holds an American nationality!

She grown up her parents, Nicholas Brigandi and Veronica Brigandi, and has a sibling named Michael Brigandi. At the age of four, she started to feel something abnormal; later her mom took her to Pat Longo and she completely got shocked because she can see spirits.

How Long Has Theresa Caputo Been Married?

Theresa used to be a married lady.

She first met Larry Caputo when she worked at her family’s oil company, and they got married on September 16, 1989. Despite problems in the daily life, the couple had shared a very happy marriage life for nearly three decades.

Sadly, this relationship finally came to an end with the separation on December 3, 2017.

Larry then moved to LA in 2018 and Theresa revealed that both were preparing for a divorce. They officially finalized the divorce in December 2018. The couple has two children with each other: Larry Caputo Jr. and Victoria Caputo.

It was recently reported that her ex husband has already started dating someone new, while Theresa does not let herself get involved in any affair.

Where Did Larry Caputo Jr. Go to College?

Her son will turn 26 this year.

The Long Island Medium TV show began in 2011, which means Theresa’s son was only 18 at that moment. Now he is definitely not a young boy that you often saw on TLC channel; actually, he has established his own life and things go pretty well.

Larry Jr. attended the College of Mount Saint Vincent, a liberal arts college, and he graduated with a degree in media and communication studies. He is currently working for Madison Square Garden Networks Inc.

How Much is Theresa Caputo Net Worth?

Due to her popularity, many often wonder: “What is the net worth of the Long Island Medium?”

When the Long Island Medium is on air, Theresa Caputo has not only gained fame and become famous, but she has also earned an impressive amount of fortune.

So what is Theresa Caputo’s net worth?

The Long Island Medium net worth is estimated about $3 millions. Most of her fortune is surely from her work as a professional medium and her hit TLC series. There is no information about her salary, but we all know she can make a decent amount of it.

Have anyone taken part in any Theresa’s live show before?

For people who haven’t seen the TLC show, I can tell you briefly about the general content: Theresa the medium will visit some of her clients and help them connect with their loved ones.

Of course that’s TV where everything can become possible.

If you are quite skeptical about her abilities, then why don’t you see her live?

Join Theresa Caputo Live! The Experience where Theresa will do a group reading for many people, most are the clients signing up for the reservation on her official website. Make a visit there for a check up on her tour schedule!

The length of each live show is approximately 2 hours.

Meet her in person and see whether or not she can make anything happen or accurate.

How Much Does a Medium Reading Cost?

Wonder about the price of a reading with Theresa Caputo?

There a rumor said that this medium is a fraud as she charges $50 per person who comes to her for a session. In fact, she has no longer performed private readings because she does not have enough time.

These days, she usually performs live shows and it costs you just a ticket to meet this incredible medium.

Depending on the zone, the Long Island Medium prices start at $39.75 plus ticket fees.

Why did the medium get cancelled?

After Theresa’s appearance on ‘Windy City Live‘ talk show, her fans and followers felt a bit annoyed because they think what she said is not convinced enough; once again, the validity of her gift is doubted.

But overall, not everyone is putting hatred on her reading.

In general, you will love this lady after receiving her words of wisdom.

She is effervescent, caring, inspiring, and very sweet to her fans. Her genuine guidance will help you find closure to any situation you are getting stuck in and re-connect with your loved ones for beautiful messages.

Additionally, her Long Island Medium show on TLC is worth watching as it’s very meaningful, touched, and entertaining.