When it comes to The World Top Psychic Mediums, apart from John Edward and The Psychic Twins, it would be a huge mistake if we don’t put the name ‘Theresa Caputo’ in the list.

She gained recognition for her work by appearing on the “Long Island Medium” TV series. Like most of skilled, professional psychic mediums in the world, she started out by giving psychic reading to private clients. With genuine psychic gift, she decided to deliver messages of healing to help people learn, grow, and embrace their lives.

Theresa Caputo was born in Hicksville (New York), where she’s still living to this day. She first started to see spirits at the age of 4. During the meeting with a spiritual adviser, he helped her realizing her ability to communicate with spirits. For years before her popular TV show, she worked as a medium – her self-stated goal is to provide healing and closure to individuals she met through her spiritual work. Over 10 years, she has used various forms of reaching out to all the spirits’ families, including via email and phone. Although a few skeptics stated that she takes advantage of mourning people for money, many trust her experiences and insights into the world of spiritualism.

She has been a practicing medium for more than a decade and constantly performs her work in theaters throughout major cities. Also, she has written several books, such as ‘There’s More to Life Than This’ and ‘You Can’t Make This Stuff up’, which became New York Times bestsellers. 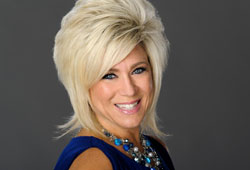 For Theresa, her career as a medium is largely noted for her participation on a show of TLC network. Her Long Island Medium show follows her life as she tries to cope with different problems with both her clients and her family. She sometimes meets with skeptics and believers in her home, other times she will talk with others on the streets, or even during the course of her daily errands. No matter what the scenario is, she usually finds spirits visit her over the course of her daily life. What is the ‘main point‘ of the show? For mediums, career and life are often impossible to disentangle. Via each chapter, Theresa Caputo will help us know how to keep the balance between the personal life and the medium life well.

After the success of her reality show, she has started a road tour. During these shows, she’ll seek out audiences, or there will be a selection process for people who truly crave for a reading with Theresa Caputo. Recently, she takes many road trips to support those outside the New York area. Well, she is really famous now. Her Facebook has almost a million followers; no wonder she’s considered as one of the most incredibly famous mediums on Earth.

Check the cost to spend on her reading!

This popular medium has been married to her husband for 24 years, Larry Caputo. They have two children who are young adults and have both appeared on the show: Victoria and Lawrence.

Generally speaking, who is Theresa Caputo? She is a genuine medium who has gained considerable respect through the TLC series with her gifted ability. Her life goal is to give her clients messages (from the Spirit World) that can help them feel the most peace at any moment.